It was quite the turn out for the Space Coast Bass Finatics this season at one of their home lakes Miami Garcia. Boasting pretty much a full field, twenty nine teams showed up just weeks before christmas to see if they could find their own gifts out on the lake in the form of some giant Largemouth Bass with pretty little bows on them. They packed the parking lot full of trucks and trailers and filled up all the spots on the bank first thing in the morning. After swapping some fish stories of the ones that got away during pre fishing, the boats were launched without a hitch.

Claiming top honors and blowing the rest of the field out of the water was the team of Brian Cole and Bill Groseclose. Their massive five fish limit tipped the scales at 23.47 pounds with the biggest bass weighing 6.32 pounds and a five fish average of 4.69 pounds. They reported bumping chatterbaits against the hydrilla proved to be the key to their impressive win.

Second place went to the team of Matt Hinman and Gary Hinman. Their bag weighed in at a solid 17.07 pounds claiming them the runner up spot and winning them some christmas money to take home.

Third place was claimed by the team of Jay Stein and Rob Branaugh with their hefty sack weighing in at 16.28 pounds which was anchored by a decent 5.31 pound bass.

Big Bass Honors for the tournament went to Jack Berry with his healthy looking 6.74 pound bass.

Next tournament will be held on Lake Kissimmee January 30th out of Joe Overstreet Landing. 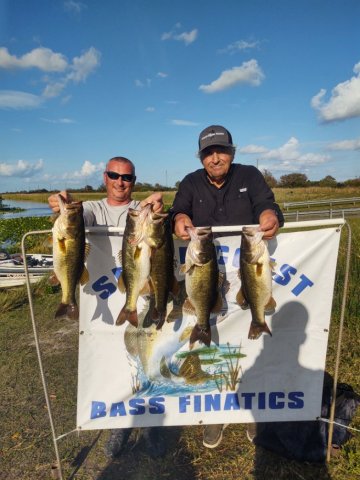 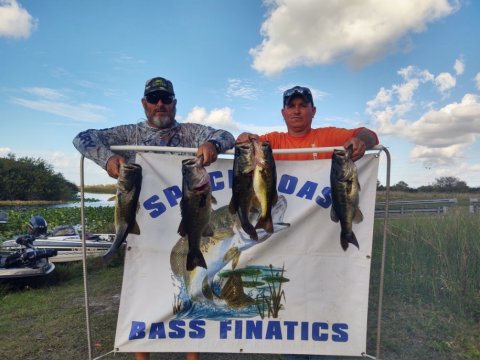 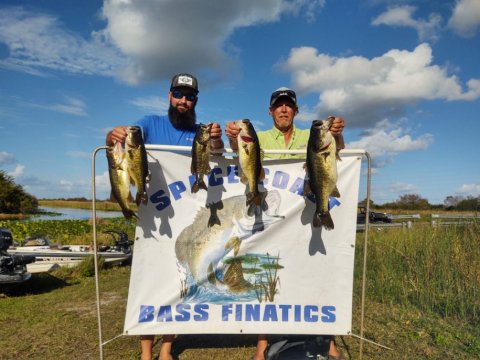