With winter upon us, twenty teams showed up to fish the harshest cold weather temperatures Florida has seen in the last decade. With a bit of a hesitation due to the freezing cold, the boats eventually starting making their way out on to the lake. The bite proved to be one of the toughest the club has ever faced with only three teams weighing in a limit, one team with three fish, three teams with two fish, eight teams catching only one fish and five teams failing to catch any fish at all to bring to the scales it ended up being a test of endurance and perseverance for those who were brave enough to show up.

First place honors went to the team of Karl Kearcher and Brian Davidson who brought in a Lake Kissimmee mega bag weighing a stellar 25.19 pounds and it included two bass over eight pounds and a five fish average of 5.04 pounds. They reported that flipping accounted for their entire limit. Great Job on such a tough day!

Second place went to the team of Mike Calloway and William Flood who also brought in a giant sack of fish weighing in at 21.65 pounds and included the tournaments biggest bass weighing in at an astounding 9.49 pounds. They reported that Mike Calloway caught the big bass and all others while flipping magnum finesse worms.

Third place honors was acquired by the team of Brian Cole and Bill Groseclose who have been on an amazing hot streak with four top three finishes in the first five tournaments so far this season. Their bag weighed in at 11.41 pounds and they reported that worms and chatterbaits was the arsenal used to catch all their fish and keep their hot streak alive.

The next tournament will be held February 27th at West Lake Toho and we will be launching from Big Toho Marina. See everybody there! 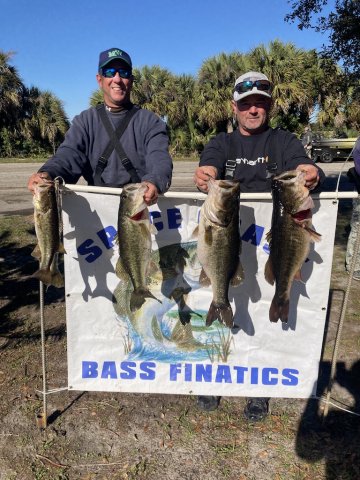 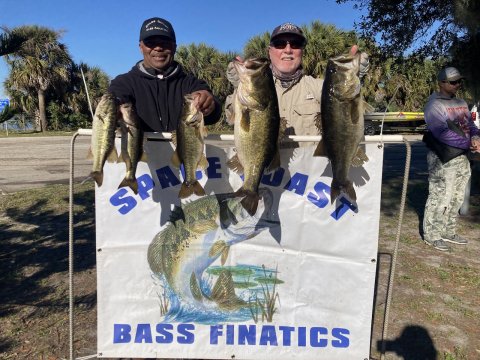 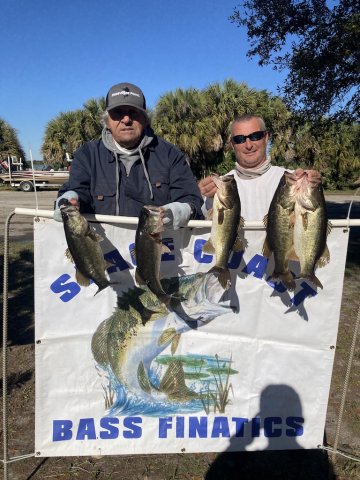