With the season drawing near the end, twenty one teams came out ready and excited to give their all in order to try and jockey into the best position they can in hopes of making this years classic championship. With all but one team managing to get a limit, it was no secret that the bite was on for the Bass Finatics on Miami Garcia. With just a little over a pound and some change difference between second place and seventh place it was one of those days where every fish and every ounce can make or break you.

First place went to the team of Karl Kearcher and Brian Davidson who ran away from the pack with their giant sack of fish that weighed in at 26.63 pounds which included the tournaments Big Bass weighing in at 8.22 pounds.

Second place Honors went to the team of Fred Reid and Jimmy Haggerty who also had a better day than most with their bag weighing a solid 21.40 pounds.
Good Job Fella's.

Third place went to the team of Dwayne Haga and Justin Reasner who just barely beat out fourth place by mere tenths of an ounce. Their bag weighed in at 20.90 pounds and was anchored by a hefty 7.19 pound Bucket Mouth caught by Dwayne Haga using a rattletrap. 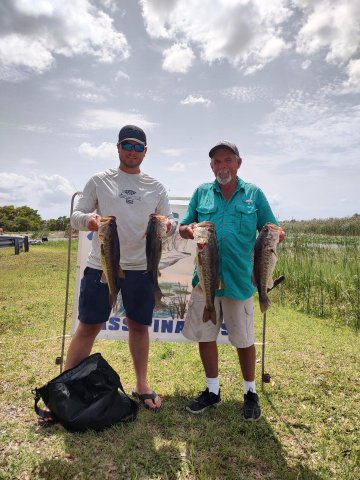