The twenty teams that showed up at Harney Pond Canal Ramp on Saturday and Sunday were greeted by windy conditions, muddy water and belligerent guides and a busy launch ramp. The water level was low as expected, but the lake was full of bass beds and bass if you could find them. Saturday proved to be the hardest day for most teams with 20 plus mph winds and many other boats to deal with as over 150 boats were in the BFL tournament out of Clewiston and another tournament from Orlando using the same ramp as we were and weighing in at the same time.

Once everyone made it to the City Ramp at Lakefront Park the club fielded the most boats/teams that we have had this year as 23 teams arrived to battle it out on The Kissimmee Chain of Lakes. the weather was almost perfect except for the passing of a cold front and a drop in temperature accompanied by 10 to 20 mph winds. The lakes were choked with lily pads and hydrilla which Kissimmee Water District was diligently trying to kill off as fast as chemically possible. 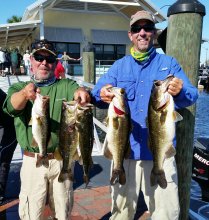 Strike Zone Fishing kicked off their 2017 bass tournament year at Miami-Garcia Impoundment with a full field of anglers which included many of the members of Space Coast Bass Finatics Club. The forty-one teams who registered for the tournaments which will take place on three other lakes over the next few months were happy to see this exciting tournament trail begin this year. Shawn Mecchella and Jim Folks welcomed everyone back from last year along with the few newcomers at the kickoff meeting held at the store on US192 on Wednesday February 1st. 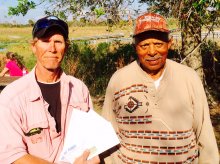 It seems that no matter when we decide to fish East Lake Toho the weather is the biggest factor in how the way the day goes. Sunday was no different as the morning started out with 45 degree temperature's and a steady rain that kept you just wet enough to make it miserable. Then you have to deal with the muddy parking lot at Ralph Chisholm Park and a ramp that would only allow four or five boats to be tied up at once. The eighteen brave teams who showed up were determined to make the best of the day and the lake. 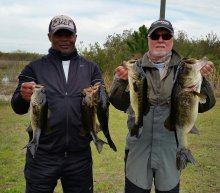 A foggy Lake Cypress proved to be a challenge for some teams but coupled with the unseasonably warm weather, lack of rain, low water and weeds growing at an alarming rate in the lake had many teams looking for answers. As usual some figured it out and made the right decisions on were to start and what to use which resulted in more than half the teams coming to the scales with a limit of bass. The others reported catching a lot of smaller bass and the usual war mouth perch, pickerel and large mudfish to keep the day interesting. 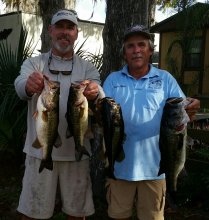 The last super moon occurred sixty-eight years ago in 1948 and just as unusual as that was the club membership has grown to 25 teams and 50 members. With the addition of Michael and Justin Cunningham team number 25 and new members William Flood and Keith Braun, this is the first time in club history that the club has been full as allowed in the bylaws. The original club LERA or Lockheed Employees Recreational Association began over twenty-eight years ago on August 1, 1988 and has never had this many members. 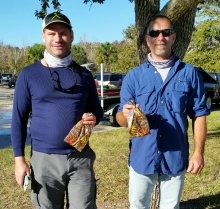 The year end for Cocoa Bassmaster was held at Lake Poinsett on November 12, 2016 on a nice Florida winter's day. Jimmy Blount took first place by a slim half pound margin with 11.62 pounds. He also recorded the biggest bass of the day at 4.69 pounds to complete a strong day on Poinsett and Winder. He thanked his boat driver, Jack Berry, who piloted for him. WAY TO GO JIMMY!!!!! 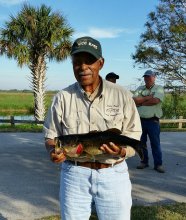 Lake Eufaula, Alabama was this years site for the National Championship for 288 anglers who qualified thru 70 divisions across the entire United States. The three day tournament lasted from October 19th thru the 21st and saw day one start out with heavy fog, a drop in temperature on day two and three along with windy conditions and the arrival of a cold front, proved challenging for most competitors. Mike, who qualified five times for the tournament but only fished in three, used a Nories Frog in the heavy pad fields to weigh-in a limit and place seventh after day one. 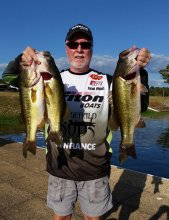 The SCBF started off last month with a bang and this month was even better as a record number of teams showed up at the Overstreet Landing ramp. Twenty-three teams arrived ready to go even if the weather report was calling for 15 plus mph winds and overcast skies. The lake was just as unpredictable as the weather with water temperature around 72.5 degrees, clean clear water, lots of hydrilla and pads, along with the two foot waves white capping in the lake. 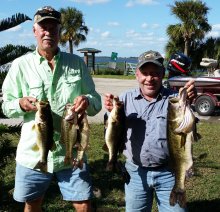 This was a great start to the 2016-17 year for Space Coast Bass Finatics. Twenty teams arrived at the ramp ready to go, in spite of the hoards of mosquitoes and pesky bugs. Most of the old teams have returned along with several new teams as well as a few alternates, which only improved the clubs competitiveness. We welcome our new friends, some from as far away as Ormond Beach like Lloyd and Jennifer Hamilton or Kirk Williams from Palm Coast, but most were from Brevard County.